Water features were surprisingly prominent in the 2015 Corrales Garden Tour, held this past Sunday. I say surprising, only because they were more prominent than I am used to seeing them in Albuquerque proper. In thinking about this, though, perhaps I should not have been so surprised. Corrales is a Village, its own governmental entity. It does not have the tiered water billing system of Albuquerque. It sits right on the Rio Grande River, and many people have wells. That is not to say at all that everyone has unlimited water use, only that water use may be somewhat less regulated than in Albuquerque city limits.

The water features seen were quite refreshing. The three shown in this piece were all different from one another. Each fit the garden it accented. A lot of good landscape planning went into all of these.

This was in the back yard of the first garden we visited. It had a little bit of everything: small waterfall, koi, and water lilies. The home had a covered back porch which looked out toward this pool, along with numerous hummingbird feeders and seed bird feeders. It was all very pleasant, indeed. 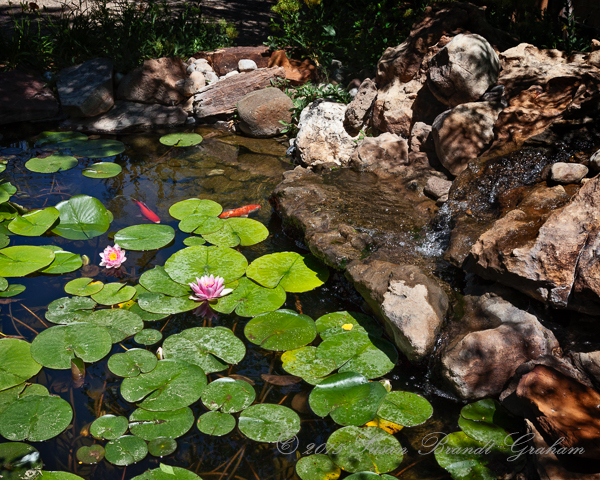 This next home had a variety of different areas within the yard area. The swimming pool was good size, and this waterfall and surrounding rockwork and sculpture were quite appealing. 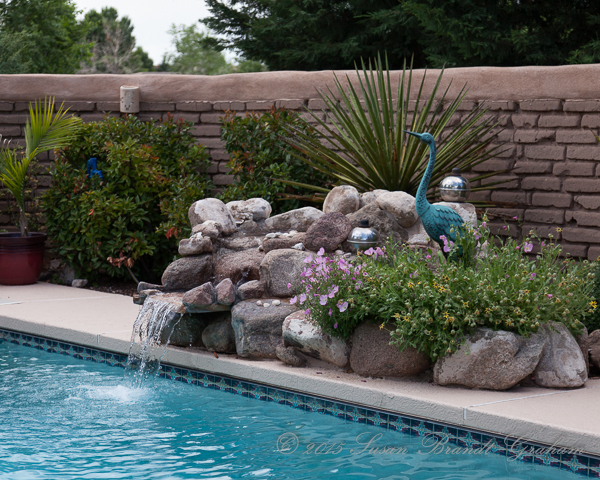 Waterfall and sculpture at swimming pool

My personal favorite of the water features was this almost hidden pool.A small wooden slide created an almost-waterfall and in addition there was a fountain supplying not only water but the beautiful ripples you can see on the surface. The growth around it was lush.

What made this pool almost hidden was a giant tamarisk tree in front of it. But, it was not the typical tamarisk tree. This one had been carefully trained and trimmed for years, making it into a very beautiful sculptural form. In fact, I was not certain it was a tamarisk. I had to ask the owner!!! Goes to show what creative people can do with something known for being less than desirable. 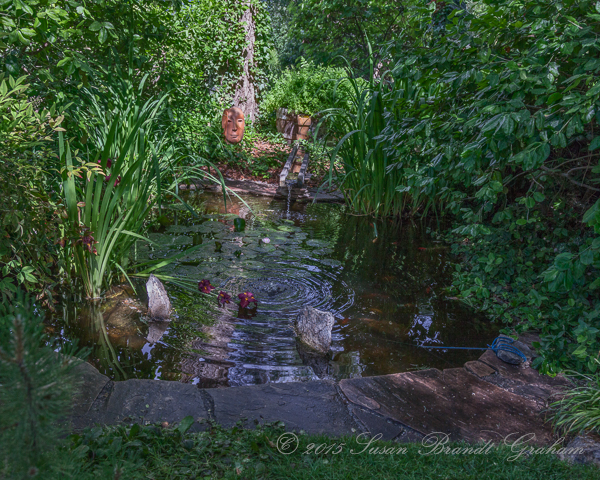 We all enjoyed the 2015 Corrales Garden Tour. I have many more photos, and different aspects of the gardens will be featured in future posts.

I thank all of the garden owners for opening their gardens to us. It was a great day and a great tour.