Pears – two varieties – appear to be developing well for 2015. A lot can happen between now and harvest time, but this year seems to be off to a good start!

For the fruit to develop, two trees are required for pollination. I do not know what varieties these are; they were at the house when I bought it. But one produces fruit that tastes delicious to people; the other produces fruit that is preferred by a variety of birds. Everyone is happy! The birds leave mine alone, and I leave theirs alone. 🙂 ))))))))) 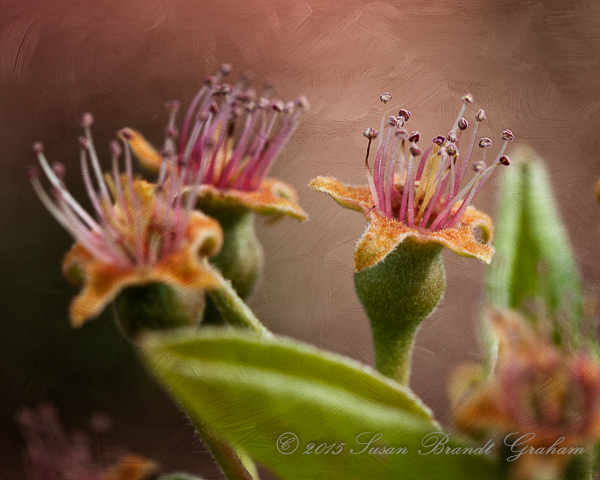 This developing fruit will become quite tasty to people in August 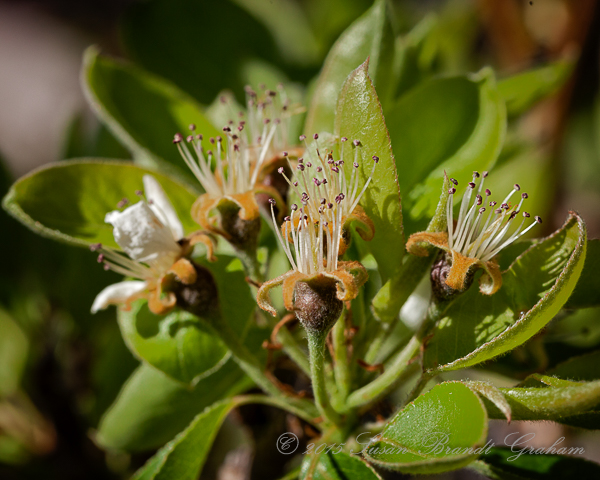 Fruit of the pollinator tree. These pears will be small and hard. The birds like them, though.

Clematis is one of the earlier flowers to bloom in my garden. I grow it with the rose, ‘Mermaid.’ This vine blooms first, and almost as soon as it has finished its first bloom, ‘Mermaid’ begins to bloom.

It is truly a sign of the arrival of spring when the vine begins to leaf out and form buds. Spring has definitely arrived in my yard! (That does not mean that we could not still have freezing temperatures at night. But hopefully the temperatures would not go much below freezing and would not last long enough to damage tender growth on established plants.) 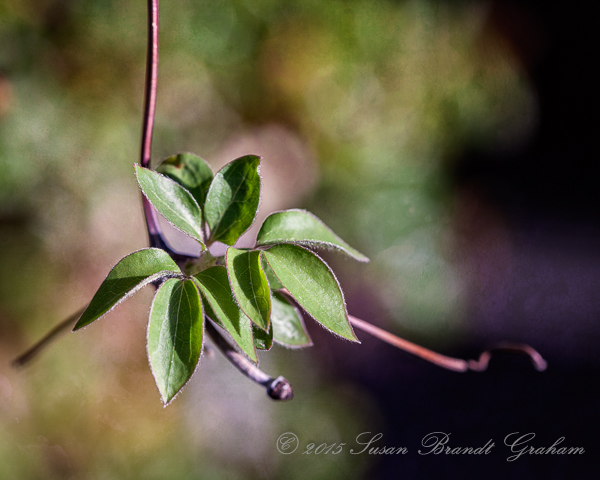 Clematis leafing out in early spring 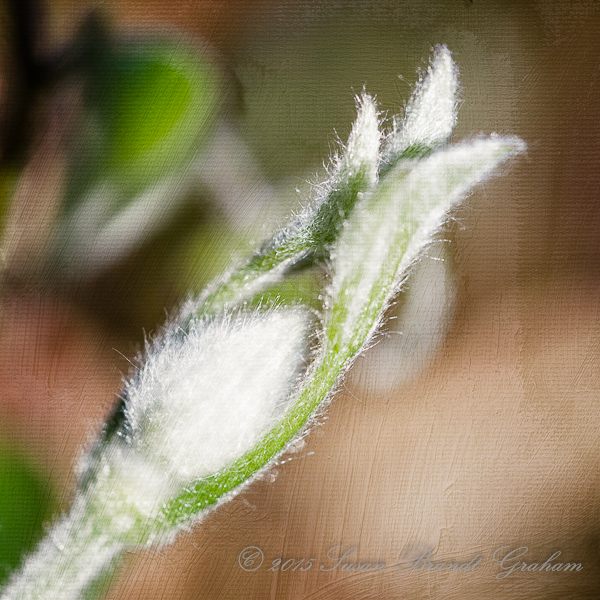 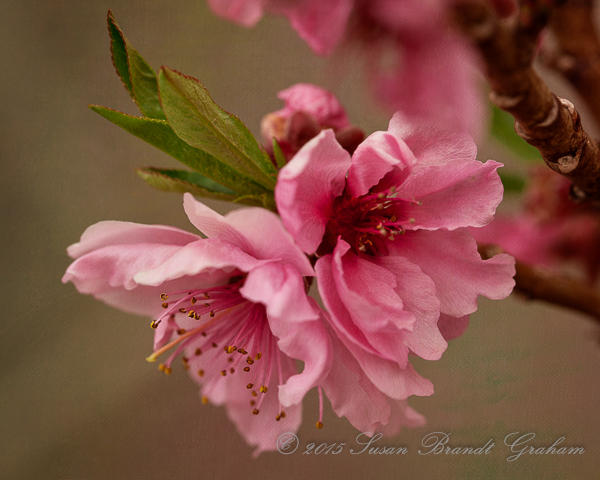 Narcissus seemed to bloom almost overnight. Once the crocus begin to bloom, many more flowers follow in rapid succession, this being one of them.

I have friends in the Northeast still enduring the very long and very snowy 2014-2015 winter. Some have noted they especially like to see yellow flowers. Well, these aren’t exactly yellow, but are kind of in the yellow family. These are especially for you. We have had a glorious winter in the Southwest Desert, at least in the high desert of New Mexico. But, our snowpack is not good. Come summer, we’ll be dealing with wild fires, while friends in the Northeast will be enjoying lush plant growth.

These seemed to come into bloom all of a sudden. Not unexpectedly sudden, only that one day they were not blooming, and the next day so many were. These do not last long, but are very much appreciated for the short time they are. I have chosen to show you a bud, fully open blooms, and a close up of a fully open bloom. 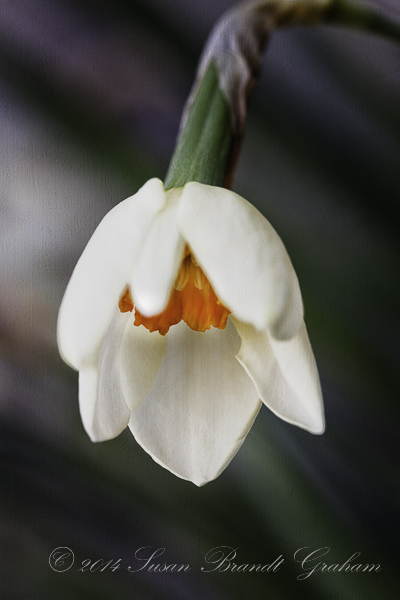 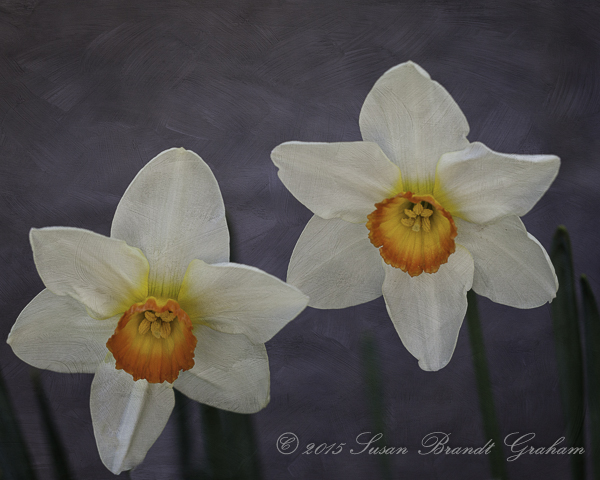 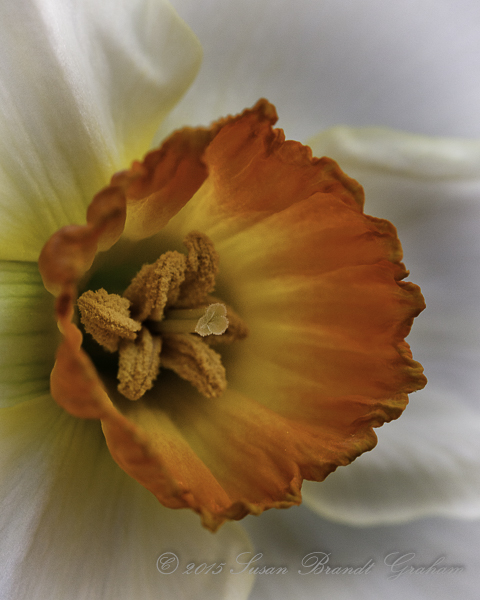 Narcissus, Up Close and Personal

Pear blossoms are another sign that spring has arrived. Many of the Bradford pears around Albuquerque have been blooming for a week or so. This is a different pear, one which produces delicious pears for eating. I do not know the name. It was at the house when I bought it. Also at the house is a pollinator pear, necessary for the production of the pear fruit. The tree from which this image comes produces “people” pears, which the birds really do not like. The pollinator pear produces “bird” pears, which this person really does not like. All the way around, it works out very well. 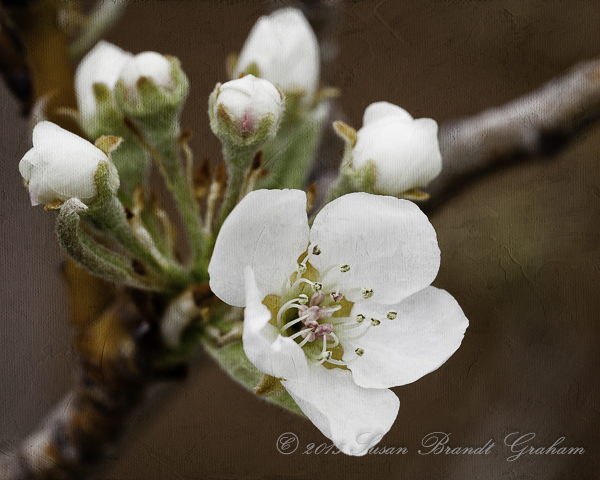 Harry Lauder’s Walking Stick, A Fun Plant in the Garden

Harry Lauder’s walking stick is a fascinating plant to have in the garden. The contorted limbs add interest in winter. Leaves are lush green in the summer. Flower arrangers like to use limbs in their arrangements. My mother, an outstanding arranger, has grown this plant in her yard for some time, and it has been one of her favorites for line material.

In the spring, “Harry Lauder,” as it is commonly referred to, can put on a spectacular display of yellow catkins, the male flowers. My mom’s plant is in “full bloom” this week, and I managed to photograph it before the rains came. I love it for creating images as much as arrangers love it for line material. 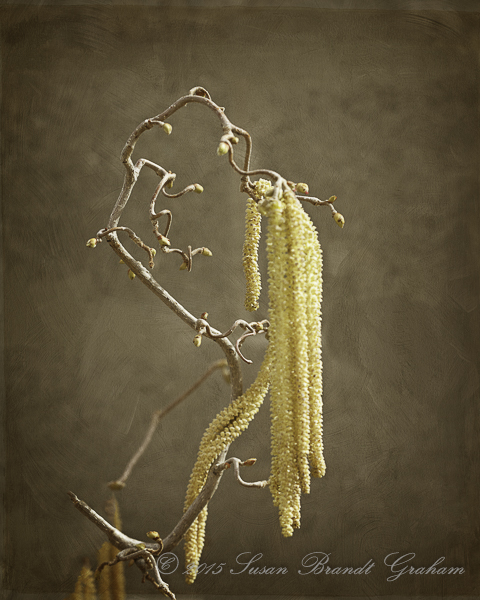 One of the butterflies at the ABQ BioPark last fall. 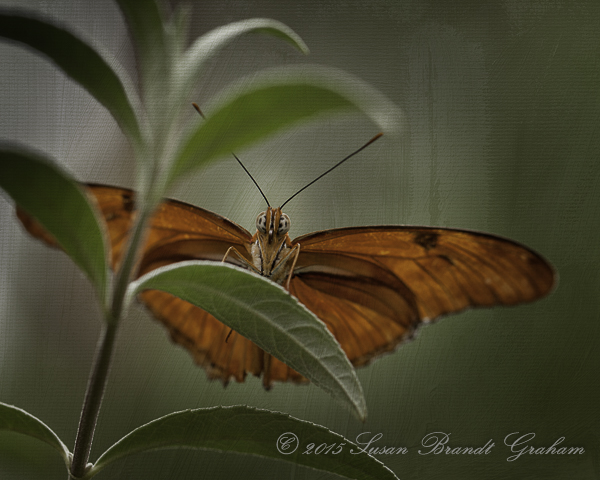 Butterfly at the ABQ BioPark

I have no idea exactly what this is, other than some wonderful bud I photographed at the ABQ BioPark last fall. 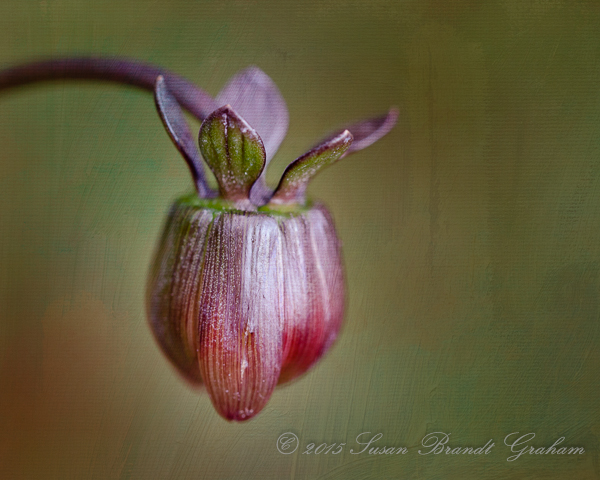 This is an example of why I do not delete digital negatives that I do not particularly care for the first time around. I had fun developing it today.

Finding beauty. What is beauty, anyway? And who gets to decide what it is? Beauty, of course, “is in the eye of the beholder,” and there may be as many definitions as there are beholders.

This year I have spent more time than ever looking at rose hips and spent blooms on roses in the yard than ever in the past. Maybe that is because the weather has been so beautiful, and yet I am not ready to prune the roses. Maybe it is because I have had the time to photograph them, and have found them interesting subjects. No matter why I have looked at them more, one thing is certain: I have learned a lot more about them than I knew before, such as there is such wide variability between varieties; each variety is pretty distinctive in its hip expression; all have their own unique form of beauty. I will admit that finding beauty sometimes took a little looking, however.

I think the one hip I found most beautiful from the very beginning was this one on ‘Fourth of July.’ 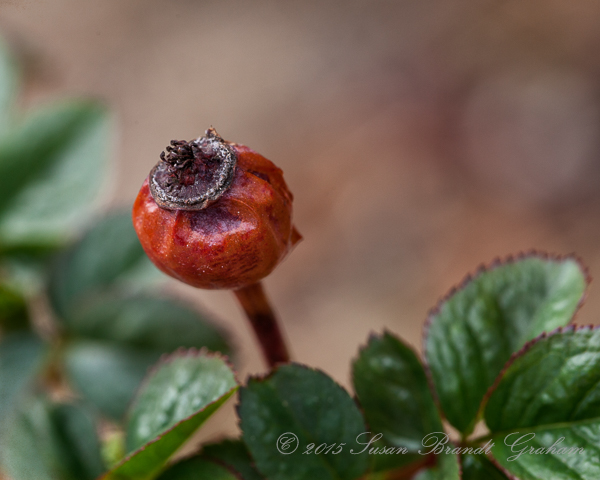 Others are intrinsically interesting, especially in juxtaposition with new leaves beginning to emerge. This one is the hybrid rugosa, ‘Buffalo Gal:’ 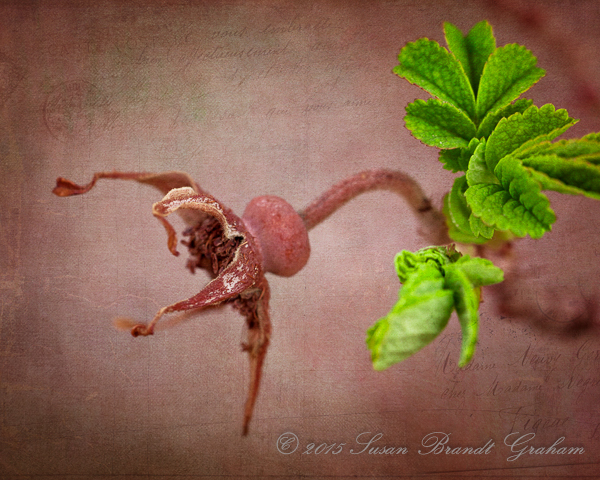 And, for some, you may have to work just a bit harder at finding beauty. This is a hip of the Austin rose, ‘Othello,’ a beautiful rose with a fabulous scent. To be honest, I was amazed when I saw these hips. I have had the rose for some time, a gift, but this is the first year I ever “saw” these hips. It was an eye-opening experience! 🙂 ))))))))) 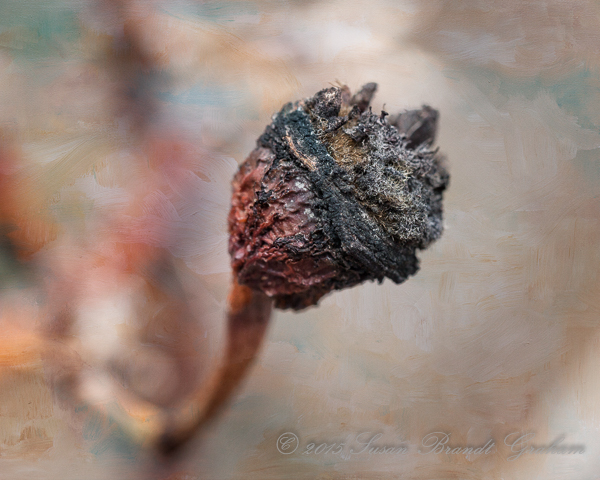 Once I actually do prune the roses, watch for it, you know it’s coming, get ready – a gallery of the 2014-2015 rose hips collection from my very small yard! 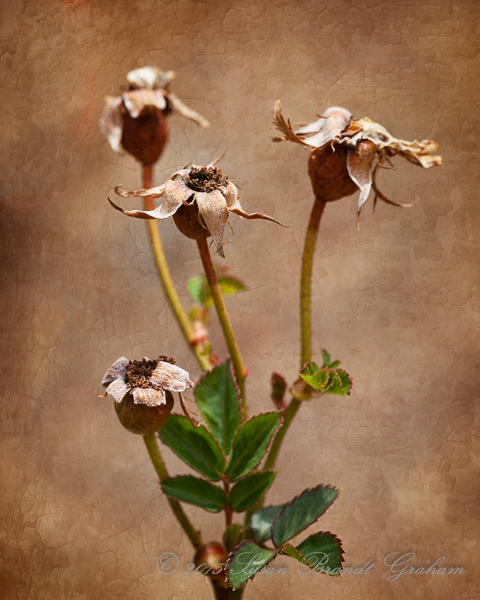 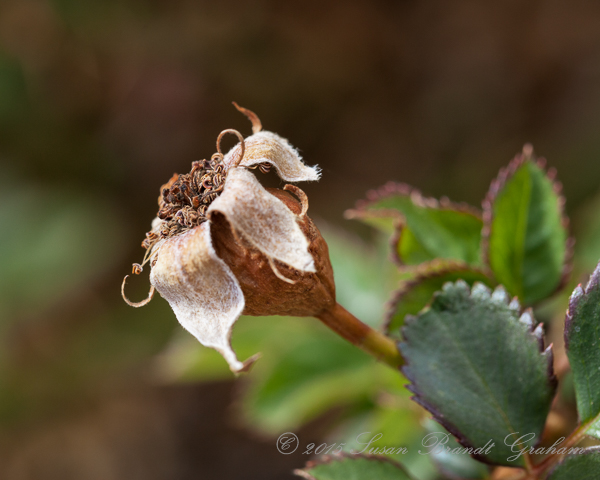