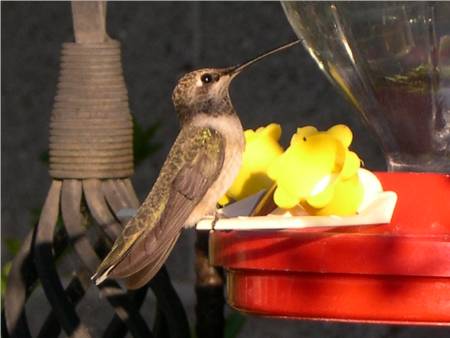 The Desert Southwest is fortunate to be home, at least part of the year, to an amazing variety of birds. The low desert, especially southeastern Arizona and around Tucson, have hummers during the winter months. Here in the high desert we have them only during the warmer part of the year.

I generally put up the hummingbird feeders on March 15, and take them down one month after I have seen the last hummer feeding at one. That is done to provide food for those migrating through – both the ones coming through early in the spring and those passing through in the fall.

The earliest hummers to arrive for an extended stay in my yard are the Black Chins. The earliest I have actually seen them here is April 13, and the latest April 15. The males arrive first, and it is important to have feeders up by the time they arrive, because they are looking for a place to establish a home. So I must get the feeders out today (and should have had them out long ago!) If you live in the high desert and want hummers to hang around your garden, I would recommend the same for you.

A variety of hummers will appear at various times. The rufous hummers, the most aggressive ones I have seen, arrive on July 15 without fail. Once again, the males arrive first, and leave first, around August 15. The females leave a couple of weeks later.

Once flowers are blooming, the hummers seem to prefer them to the feeders. But right now, not much is blooming, which is why the feeders are important if you want to attract them to your garden.

You should clean the feeders and change the nectar every couple of days. You will rewarded for your efforts by the appearance of these fascinating little birds.

One thought on “Attention, Hummingbird Lovers”